Are we in a dinosaur renaissance? Each summer NC State University paleontologist and Head of Paleontology at the NC Museum of Natural Sciences Dr. Lindsay Zanno and her students head out on remote expedition and return triumphant, bearing the remains of undescribed species of dinosaurs and other ancient vertebrates. Their summer exploits teach us that before paleontologists can apply the newest tools and techniques to study ancient life, they must first do the backbreaking labor of finding and excavating their fragile remains. Dr. Zanno shares an update on their summer 2019 finds. 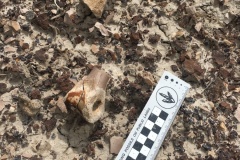 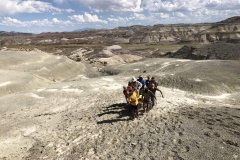 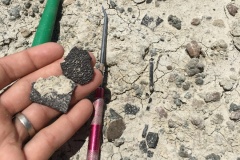 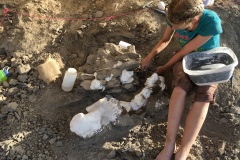 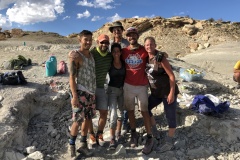 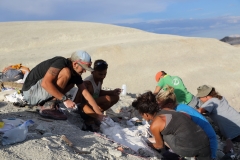 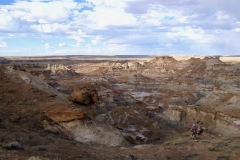 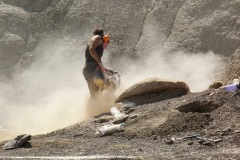 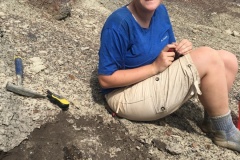 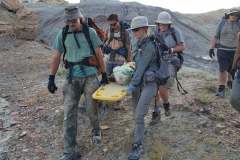 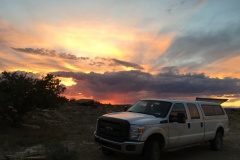 This past summer, the Zanno Lab headed out on a 10-week expedition to the American West and returned with >3,200 lbs of fossils and some surprises, including several new (old!) species. Our first stop was the famous 67 million-year-old badlands of the Hell Creek Formation in Montana–home of Triceratops and T. rex. There our team collected a literal truckload of microfossil-bearing sediments, which will be screenwashed and sent to middle school classrooms around North Carolina as part of a new citizen science project launching spring of 2020 dubbed Cretaceous Creatures. Participating students will sift through the sediment to identify and catalogue the tiny remains of mammals, turtles, crocodiles, fish, snakes, and even baby dinosaurs to advance our understanding of biodiversity directly before the end-Cretaceous mass extinction event.

The crew then moved south and with the help of an intrepid team of NCSU undergraduates from BIO 325 (Zanno’s Paleontological Field Methods course), spent a month prospecting for new dinosaurs in the breathtaking scenery of northern New Mexico during the record summer heat wave. Despite brutal temperatures, a creepy black-widow infestation, and melting camping gear, we discovered and began excavations on a number of newly discovered sites including a skeleton of a tyrannosaur (possibly Dynamoterror), a new, undescribed species of feathered, bird-like dinosaur, and several large plant-eating dinosaurs.

After shipping off the undergraduates who were desperate for a shower, we picked up some fresh crew members and headed to central Utah, where we’ve been painstakingly unearthing a 96 million-year-old ecosystem lost to time. We have already named two new predatory dinosaurs from this area: Moros intrepidus, the tiny predecessor to T. rex announced this spring and Siats meekerorum one of the largest meat-eating dinosaurs yet discovered in North America; as well as the first clutch of oviraptorosaur dinosaur eggs found on the continent. This year, in an incredible stroke of luck, we discovered a second oviraptorosaur egg clutch, the remains of a foot-long baby Cretaceous crocodile, and an intact skeleton of a new species of burrowing, plant-eating dinosaur known as an orodromine. We also found dozens of black widows that had hitched a ride in our vehicles…

The trip closed out with a fast and furious stint to collect hundreds of bones of the feathered therizinosaur–Falcarius–from a mass-death quarry in central Utah. All together, the 2019 expedition team trained four NCSU graduate students, twelve undergraduates, and seven volunteers in fieldwork methods. Two of these students were supported by a recent award from the National Science Foundation* that provides opportunities for community college students to engage in geoscience research. We also connected with hundreds of downtown visitors by live-streaming from the field to the NC Museum of Natural Sciences’ Daily Planet Theater and thousands with our real-time social media posts. Missed the live stream events and paleoposts? You can check them out on the NCMNS’ livestream page and on Twitter @expeditionlive. Rather see the fossils in person? Come to the NCMNS’ glass-walled Paleontology Research Lab and watch as our new dinosaurs are conserved and prepared for research this autumn and winter.