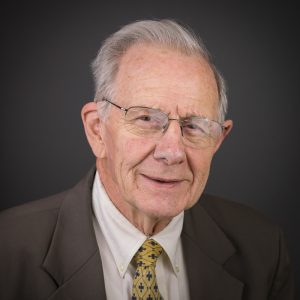 Well-known names are plastered to the side of a building, encrusted in a sidewalk, or bolted to a monument across campus to signify their influence on the university. However, the names of some are not so visible, despite their long-lasting impact.

This was true for Ellis Cowling, an North Carolina State University faculty member who began a career at NC State in the late 1960s and has since influenced areas like the Office of Outreach and Engagement, the tenure program and various colleges.

Sitting with tuffs of silver atop his head and a perfectly ironed button-down shirt with the monogram E B C, 86-year-old Cowling reflects back on nearly sixty years of accomplishment. In all those years of change he says there has been one constant theme: the responsibility to expressing his convictions.

Each day the NC State community benefits from Cowling’s accomplishments, even if they do not know him personally. He was a crucial member in designing the NC State University values statement: “In collaboration with our colleagues across campus, we prepare students to succeed academically, professionally and personally, to embrace a commitment to lifelong learning, and to become informed, engaged, and productive citizens.”

“That is the most important sentence I have helped to create,” said Cowling. The NC State value statement impacts each member – student, faculty and alumni – of the of the university’s community and continues to do so for past, present and future generations.

According to Cowling, the most important thing he accomplished at NC State was the revision of the tenure program. Prior to the revision, tenure faculty members were expected to meet three realms of instruction: teaching, service and research. Cowling recognized that not all fields of study utilize research to signify accomplishment, so he gathered the dean from each college to construct a white paper specific to their college. Cowling said the revision resulted in a tenure program comprised of individually created and mutually viewed expectations between the faculty member, the dean, the department head and the university.

In reflecting on these accomplishments, Cowling explains that he was acting out of responsibility to share his convictions rather than to gain recognition. Cowling said, “A lot more would get done it we aren’t so focused on who gets the credit.”

WHERE IT ALL BEGAN

At N.C. State Cowling served as a professor and as an Associate Dean for Graduate Education and Research for the College of Forest Resources. He remained at the university until his retirement. Cowling was also named a University Distinguished Professor At-Large Emeritus of Forestry and Plant Pathology at N.C. State. His education opened the door for Cowling to enter the university, but his willingness to share his convictions regarding the university’s actions allowed him to impact the campus on an institutional level.

CHANGE IS NOT OVER YET

Although technically retired and happily living in a retirement community, Cowling is far from slowing down. In late February, he planned to attend the Association of Retired Faculty hosted by Margaret Spellings. At the event, Cowling prepared questions regarding the recent decrease in funds for the N.C. State Office of Outreach and Engagement. In his time at N.C. State, Cowling worked closely with the office to support its extension throughout North Carolina. It would be easy to let someone younger or ‘less retired’ take on the task, says Cowling, but he still feels it is his duty to speak out and stand up for others.

After reflecting on his life’s resume, full of accomplishments and victories for NC State, Cowling said with relief, “I have done my responsibility to express my convictions for what the university should do.”