According to mainstream media, early voting for the 2020 election has broken records. As this hotly contested election season draws to a close, the voice of the people is about to be heard. And while their votes may not be counted among official election results, unofficially, North Carolina’s youth will be heard because of the efforts of N.C. Cooperative Extension and the Kids Voting program.

“Kids Voting is a non-partisan, youth-led, youth-centered program. Youth are leaders in the development of the program as well as being participants,” explained Carolyn Kreuger, associate Extension agent, who has dedicated 15 years to the program’s success in Durham County. “The program gives experience in voting and a knowledge of how citizenship works.”

The Kids Voting program, part of Kids Voting USA, came to Durham County in 1998 and was originally part of the Chamber of Commerce, before moving to Extension in 2005. The program replicates the adult vote as closely as possible, though in 2020 that means online voting due to the pandemic. In other years, votes are taken through both paper and digital ballots administered through local schools, libraries, and some businesses, as well as in adult voting precincts.

“It is exciting to see youth recognize that voting is a privilege, whereas sometimes, as adults, we think of it as a chore,” said Kreuger. 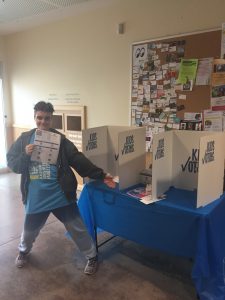 Linden James is proud of the work that Kids Voting does to encourage Durham county youth to be active, engaged citizens.

Along with the process and importance of voting, Kids Voting covers another angle. “Kids voting goes beyond civic knowledge — the information that you get in school. We teach civic skills, like how to evaluate a candidate and how to read news sources, and youth gain civic agency – the belief that you have power as a citizen,” said Kreuger.

Among the work of youth volunteers is the development of a voter guide. Youth research candidates, conduct interviews and compile that information into a guide that is used by many adult voters in Durham County, as well as by the voting youth. This year, the voter guide effort was led by Durham School of the Arts (DSA) sophomore Linden James.

“I first volunteered with Kids Voting three years ago through DSA,” James said. “As a precinct captain, I saw the excitement at the voting site and that led me to attend a candidate forum in 2019.” And their interest has grown from there (James requests use of a gender neutral pronoun).

“Working with this organization has made me think about educating myself and becoming an informed, active citizen,” said James. “I now understand the power that youth have ― that I have. … You have an opinion; you can speak it, and that is really powerful. I want to extend that to other youth.”

Growing the program statewide through 4-H

From a modest start with three participating schools in 1998, Kids Voting in Durham County now sees participation from 90% of all Durham schools. This year, despite the online only voting, 26,000 students will participate.

The success of Durham County’s effort, led by Kreuger for the last 15 years, has led 4-H youth development specialists at N.C. Cooperative Extension to begin expanding the program across the state, with several additional counties participating in this election and more to follow in the future.

“The Kids Voting program fits very nicely with our work (4-H) with civic engagement. That is something 4-H has focused on for many years,” said Mike Yoder, state program director for 4-H.

Yoder explained that piquing the interest of youth at an early age allows them to see how important it is to exercise their rights. “This year, one vote may really make a difference… in society, new voices are rising up and more of our young people are seeing that they really can have a voice at an early age.

“The takeaway (of this program) is that young people begin to realize that there are ways in which their actions influence their communities and one of these ways is voting. We want to drive interest in the political process. We need people to get involved in the process, and we need youth to think about why we vote,” Yoder said.

Talking to youth about voting

“When we start kids young, they develop that feeling that their voice is heard,” she said. “Parents are a big influence on whether a kid grows up to vote. It is not income or economics, but whether your parents voted.”

For James, the involvement of adults is an important part of building active, engaged youth. “When you educate young people, you get adults more involved. Don’t tell youth what to think, but teach them how to think. Have materials available; have active dinner conversations about candidates and voting. Ask your kid to ask you to pledge yourself to vote.”

Youth across the state can vote today through NC 4-H. Learn more about Kids Voting online.

This post was originally published in College of Agriculture and Life Sciences News.